Ludwigsburg Residential Palace is one of the greatest baroque palaces in Europe and has been preserved in its original condition. It offers visitors an insightful tour through the centuries – ranging from Baroque, via Rococo to Classicism.

A palace of opulence and three epochs

Ludwigsburg Residential Palace is one of the greatest baroque palaces in Europe and has been preserved in its original condition. It offers visitors an insightful tour through the centuries – ranging from Baroque, via Rococo to Classicism.

Baroque, Rococo and Classicism all in one palace

A total of 400 rooms from three epochs, ceremonial early baroque apartments dating to the time of Duke Eberhard Ludwig, who founded and gave his name to the palace, fine rococo rooms dating to the time of Duke Carl Eugen and – as a special rarity – the spacious elegant sequences of rooms of the first Württemberg royal couple: the finest possible princely home decor and representational culture. The palace has withstood the three centuries since its foundation virtually undamaged – and these three epochs thus present themselves like a giant picture book of princely living and representation since the 18th century.

Palace and city as a baroque establishment

Ludwigsburg was founded well over 300 hundred years ago. The Württemberg Duke Eberhard Ludwig has originally planned a hunting lodge on the forested grounds north of the old royal seat of Stuttgart, but the construction of the palace grew ever bigger, until after almost 30 years the enormous royal seat of Ludwigsburg was finally completed. Matching the building of the palace, he simultaneously created a residential town and gave it its name – Ludwigsburg.

Here almost everything that was once part of a shining court has been preserved. The Palace Theater, for example, that Duke Carl Eugen built in 1758. Then the Duke attracted not only the most famous singers, musicians and dancers to Württemberg, but also adventurers such as the Italian Giacomo Casanova. The venue for the glittering performances has been preserved. The machine that operated the baroque stage equipment, a sophisticated construction of wood and ropes, still functions today: the oldest functioning stage equipment in the world, over 250 years old.

A cosmos of the courtly world with several museums

Unique: the tour of the impressive staterooms of the palace also includes several museums with exquisite collections, such as the Ceramics Museum with precious 18th and 19th century porcelain. The Fashion Museum is unique. Its centerpiece is the court dress of the 18th century. Other museums in the palace are the Baroque Gallery of the Stuttgart State Gallery, the Lapidarium and the Theater Museum with finds from the history of the Palace Theater.

Ludwigsburg offers a diverse program of guided tours – 365 days a year. This includes a particularly large selection for families: the “Kinderreich”, an individual join-in museum, where children can dress up, try on crowns, sit on the royal throne or lie in the royal bed. 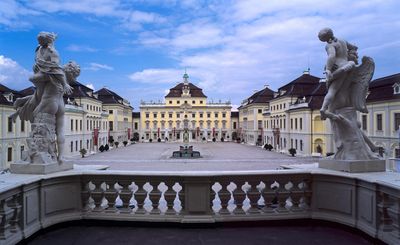 These cookies are necessary for operating the website and cannot be deactivated. In general, these cookies are only created in response to actions taken by you, e.g., when filling out forms. This is how your browser’s various queries are assigned during a single session. It is how your computer can be recognized when you return to the website. You can set your browser to block these cookies. However, this will result in reduced functionality of our website.

fe_typo_user
This session cookie stores a session ID, which enables the assignment of your browser’s various queries during a single session. It allows for the recognition of your computer when you return to the website. The session cookie is deleted when you close your browser.

This website uses Matomo (www.matomo.org) technology to collect and anonymously store data for marketing and optimization purposes. These cookies enable us to count page views and clicks so that we can measure and improve the performance of our website.

_pk_id
Storage period: 13 months.
This cookie stores information on the user, e.g., a unique user ID, visits to the website, and also the date and time (time stamp) of the creation of the cookie.

YSC
Storage period: The duration of the visit.
This cookie creates a unique ID to retain statistics on the YouTube videos viewed by the user.

PREF
Storage period: 8 months.
YouTube uses this cookie to store information such as the user’s page configuration preferences and playback settings such as autoplay, randomized mix, and player size.